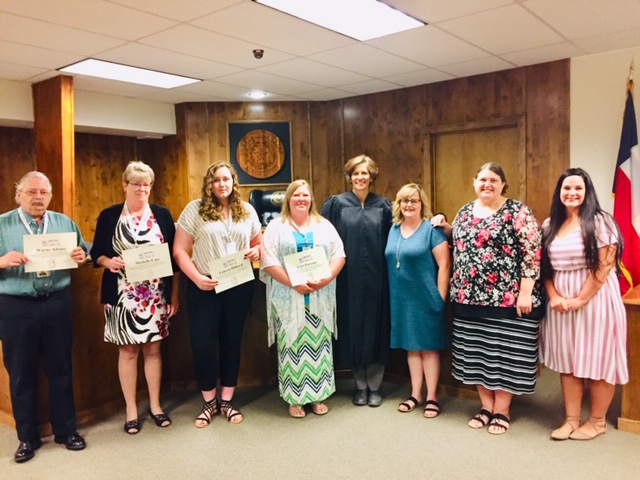 “We thrilled to welcome these people to our team,” said Sandy Barber with the Fannin County Children’s Center, which includes the local CASA program. “This helps get us closer to having an advocate for every child in foster care from Fannin County.”

In the year ending August 31, 2018, CASA served 131 children, which set a new record for the number of children served in a year.  In the first 10 months of the current fiscal year, 102 children have already been served.  More volunteers advocates are still needed in order for every child in foster care from Fannin County to have one.  Another training class is already being planned to start September 10.

All volunteers completed an intensive training class which prepares them to serve as Court Appointed Special Advocates (CASA) for children who have been removed from their home due to abuse and neglect.  The district judge appoints CASA volunteers to serve as the Guardian ad Litem for each child who has been placed in the state’s custody.  In that role, CASA advocates investigate the child’s situation, prepare written reports to the court and advocate for the child’s best interest in court hearings and other settings.

CASA is one program of several programs for abused and neglected children that are operated by the Fannin County Children’s Center.  For more information call (903) 583-4339 or visit www.fanninccc.org.