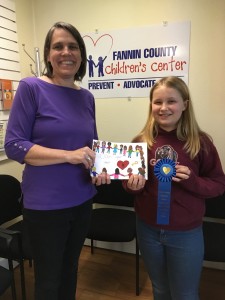 A sixth grader from Honey Grove took home the top prize in this year’s art contest sponsored by the Fannin County Children’s Center. Evangeline Barbee earned $100 and a blue ribbon for her drawing of several children holding hands in a circle.

Barbee’s artwork will be featured on the front of cards that will be mailed to local supporters of the Children’s Center to raise funds to sustain the variety of services the center offers to children and families recovering from abuse and neglect.

Second place honors went to Reagan Sutton, who is an second grader in Howe. Her artwork features a bright red heart and will be featured on the inside of the cards. She won $50 cash and a red ribbon for her artwork.

“Our judges had a difficult job in deciding the winners,” said Sandy Barber, Executive Director of the Children’s Center. “We are grateful for all of the children and youth who created and entered their artwork, as well as the parents, grandparents, teachers and other adults who helped them get it turned in.”

The artwork was scanned and sent to a local printer who printed up cards for the Children’s Center. These cards will be mailed to more than two thousand people to help raise funds to sustain all of the services offered by the center.
The Children’s Center’s mission is promoting safety and improving the lives of abused and neglected children. Programs include Court Appointed Special Advocates (CASA), the Children’s Advocacy Center and child abuse prevention programs. 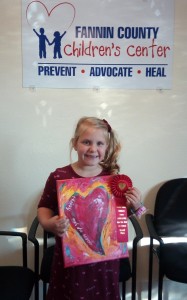