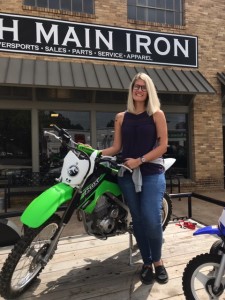 Dani Gerhardt has been named the CASA Volunteer of the Quarter by the Fannin County Children’s Center. Gerhardt became a CASA advocate for children in foster care a little over two years ago. Ever since her son was born, she has always wanted to try to make the world different for him. She became a nurse because she enjoys caring for others in need. She was looking for a way to volunteer to give back to the community and set a good example for her son when she found CASA.

“I didn’t fully understand until my second case why CASA was so important,” said Gerhardt. “To summarize a very complicated situation, my supervisor and I knew that something needed to change with my case. However, no one else in the court room agreed. We continued to advocate for what we felt was right. After some time and some patience, I feel we were able to change the course of the case for the better. It really showed me that being a CASA is important.”

When going through the initial training, Gerhardt learned about many statistics of children in foster care, including how many children were in care, how long they often stay and how many would age out of care. “Those statistics do have a face,” said Gerhardt “and once I saw that those statistics were a real person, I knew that I wanted to continue. My first case was simple, completed in one year. My second case has been much more difficult, and it really showed me why CASA is so important to the youth in our community. Being a voice for the children’s needs is crucial.”

Julie Luton has been Gerhardt’s supervisor from the start. “It has been a great joy to work with her,” said Luton. “She has been steadfast and positive through many difficult challenges. Children had to be removed several times from different placements. Hard decisions were made and no one agreed at first with Dani in court. Still, Dani stood in court and advocated for the kids on her case. She was never unsure or wavering to keep them safe.”

Several children in foster care in Fannin County do not have a trained volunteer advocate on their case. The next training class for CASA volunteers is scheduled to start on September 10. Being a CASA advocate is just one way to volunteer at the Fannin County Children’s Center. To learn about all the ways to volunteer at the Children’s Center, make plans to attend the next volunteer information session on Tuesday, August 27 from 5:30 – 6:30 pm at 112 W. 5th Street in Bonham.