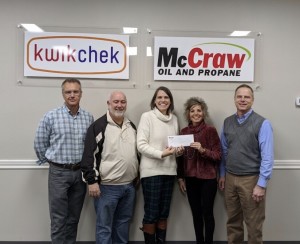 McCraw Oil and Kwik Chek have been hosting an annual charity golf tournament for 24 years.   CASA has been the beneficiary of the event for the last 12 years. The most recent tournament raised a grand total of $62,000 for CASA programs, which brings the 12-year grand total to $622,000.

In recent weeks, the leaders of these companies have been presenting checks from the tournament proceeds to local CASA programs across the state in the communities where they do business.  Recently, they presented a check for $15,000 to the Fannin County Children’s Center in Bonham, which operates several programs for kids who have been abused and neglected, including CASA.

Kwik Chek and McCraw Oil’s mission is “we strive every day to make our communities, our team members, and our customers better off for having known us, or as we say, we ‘leave ‘em better.’”

Children’s Center Executive Director Sandy Barber said “We really appreciate everything Kwik Chek and McCraw Oil does for our center and our community.  Their gifts are making a difference for kids and fulfilling their mission of leaving our community and kids better.  The golf tournament alone has generated $112,250 for the Children’s Center and that does not include all of the other sponsorships and donations they have made over the years.”

CASA, which stands for Court Appointed Special Advocates, recruits and trains volunteers to become advocates for children in foster care.  When a judge determines that a child is no longer safe in their own home, CASA is assigned to gather information and make recommendations to the courts about what would be best for the child.