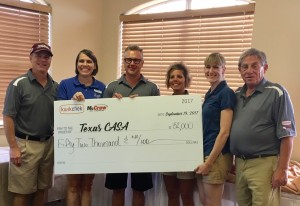 For 22 years, McCraw Oil and Kwik Chek have been hosting an annual charity golf tournament. For the last 10 years, CASA has been the beneficiary of the event. In the past decade, this event has raised more than a half million dollars to help sustain this non-profit that serves children in foster care.

This year the event raised $52,000 for CASA programs, which brings the 10 year grand total to $504,000. This year’s tournament was held at Tanglewood Resort in Pottsboro.

“It really is an honor to be able to support the CASA organization with our annual fundraising efforts,” said Smartt. “They are an organization with caring volunteers doing a great job to help represent children in very difficult circumstances. It is something that our Kwik Chek and McCraw Oil employees believe in and take pride in contributing to such an essential organization. Our goal is to continue to find new ways to help increase fundraising and awareness of CASA and what they do for the children and families in our community.”

First place team in the golf tournament was sponsored by Pepsi, General Mills and Crossmark and included David Staeheli, Curt Webber, Corey Esser, Silas Stewart, Lindsey Hansen and Henry McDonald. Second place team was sponsored by First United Bank and included Dennis Garrett, Brett Rogers, Bert Davison, Kyle Million, Justin Scott and John Hoefer. Third place team was sponsored by Legend Bank and Altria and included Jon Sisk, Danny Stroud, Charlie Jo Cary, Bill Yarbro, Miguel Lopez-Vergara and Keith Zack.
CASA, which stands for Court Appointed Special Advocates, recruits and trains volunteers to become advocates for children in foster care. When a judge determines that a child is no longer safe in their own home, CASA is assigned to gather information and make recommendations to the courts about what would be best for the child.

Tournament proceeds will be donated to local CASA program across Texas in the same communities where Kwik Chek and McCraw Oil do business. Some funds will also be given to Texas CASA, which is the state association that provides training, technical assistance and other support to local CASA programs.

“We cannot say thank you enough to everyone at Kwik Chek and McCraw Oil. Their generous vendors and hard-working, dedicated employees make this a great event every year,” said Sandy Barber, director of the Fannin County Children’s Center which is one of the local CASA programs to benefit from the event.